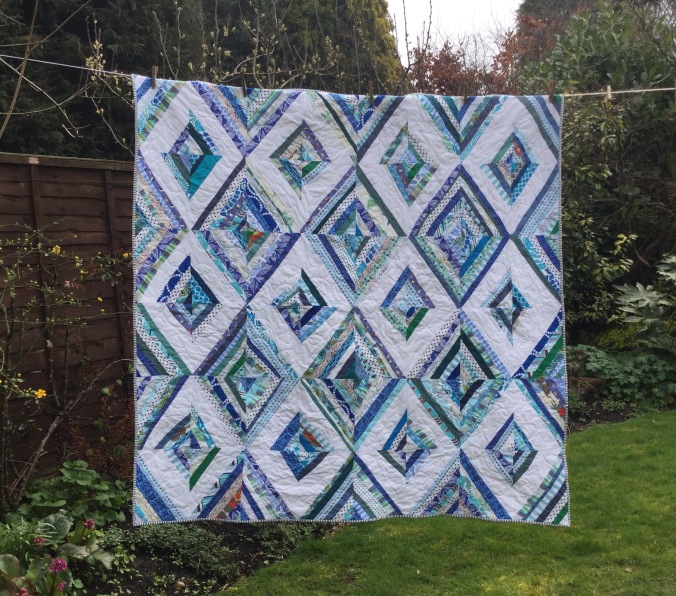 This is a very long-standing work in progress. It began at least a couple of years ago, inspired by a quilt linked up to Scraptastic Tuesday made of strips of fabric (strings). This monthly link up is a very good source of ideas for what to do with the ever mounting scraps that threaten to break out of the glass containers on a regular basis. These strips of blue and green scraps were sewn on to A4 paper. This was partly because I like the diamond formation they make when assembled  but frankly mainly because at any point in time I have an equally large mountain of A4 paper waiting to be shredded. Using them was a way of killing two birds with one stone. 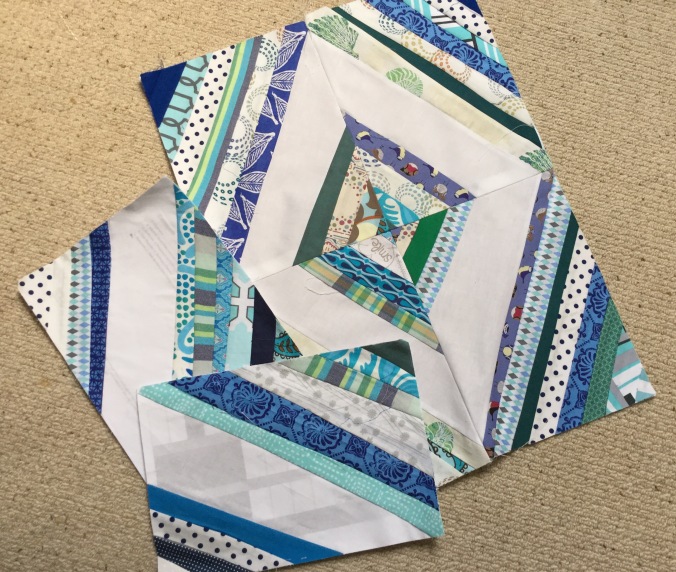 Every so often  I would add to these paper-based blocks as the right colour scrap strings got generated. It took up masses  of room in my WIP drawer because of the paper backing and I wanted a decent size quilt. To make room I did make a concerted effort to finish the blocks and assemble the top to at least eliminate all the bulk of the paper.  So the top got made back in the autumn. 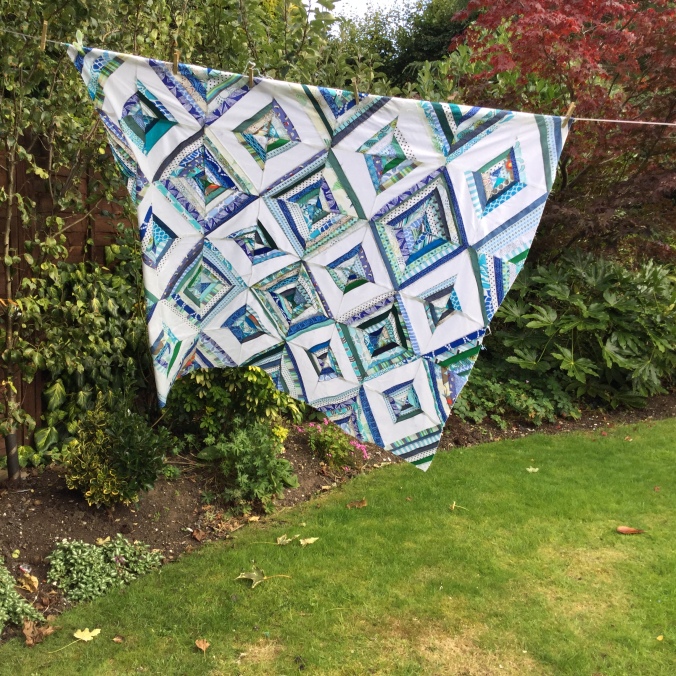 It’s been on my quarterly finish along for too many quarters but eventually it’s been completed. 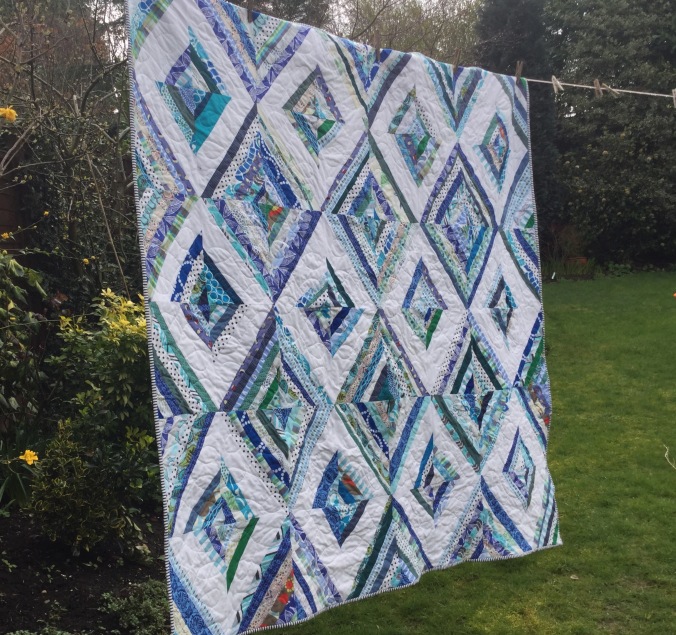 I have to say this is not my finest finish! I did, I suspect what most people would do, which is fingerpress  and not iron the strip seams.  What this means of course is that when you take the paper off sometimes the blocks aren’t as flat as they could be. Furthermore when you  join rectangles together and not square ones you are using a different seam allowance, not the standard quarter inch. I also very unwisely used some very loosely  woven fabric that I had leftover from making table mats.  Some of the seams needed redoing. On the basis that quilting can sometimes mask these deficiencies I choose a large loopy style and free motion quilting on my domestic sewing machine. This did help and disguise some of the puffiness. To make up I decided to handstitch the binding so it would be as neat as possible and then to my horror I found this …. 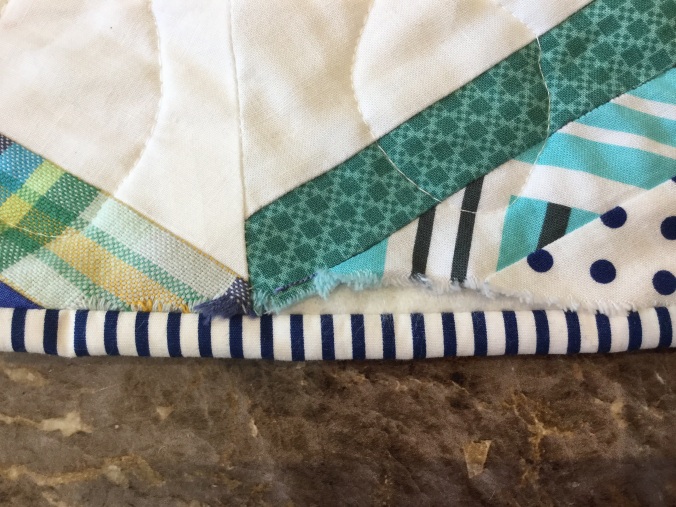 Skye closely  inspected the problem but what to do? 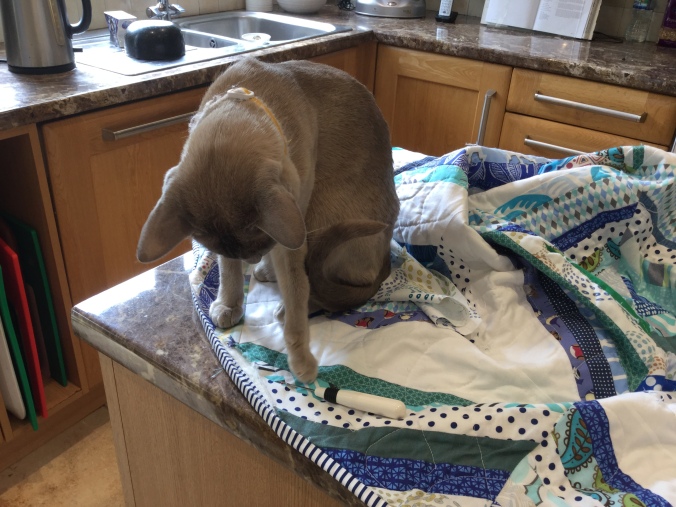 Patching the gap was my last resort because although this is patchwork of course I don’t think I could’ve repaired it in line with the strings –  it would’ve just looked like well patched!!  Closer inspection revealed that the problem had been that the top was not sufficiently well basted to the batting and when it was quilted it moved from the edge and caused the problem. Fortunately removing the binding and undoing the quilting then with a bit of a stretch it could be  repositioned and rebound. Leaving this … 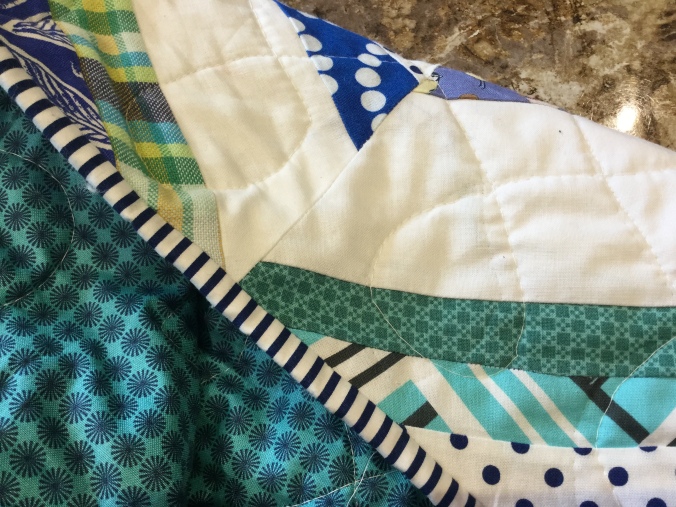 Its certainly proved a popular quilt in this house and with still chilly evenings I have found it draped over a child on the sofa as I’ve been taking my time to hand stitch the binding only to be quickly removed so it doesn’t get dirty.   It does remind me though that we need another quilt in the lounge and this time a large warm one so that’ll be on my quarterly finish target list for Q2.

Also linking up with Crazy Mom Quilts and My Quilt Infatuation