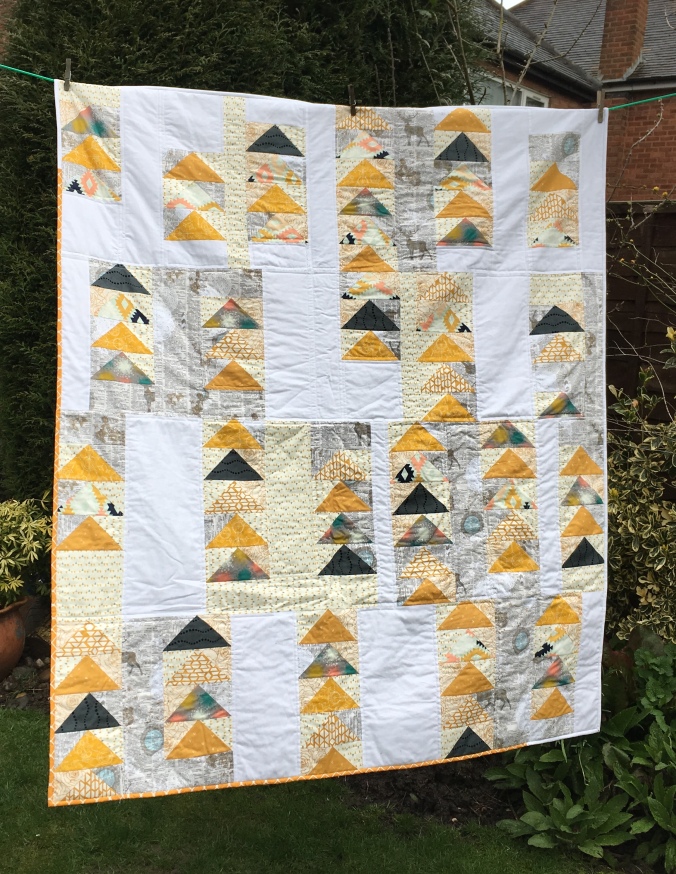 I really don’t know why this quilt took so long to finish off. This has been patiently waiting well over 3 years and it’s been in my Finish Along list sooo many times.  It is exactly the sort of project where a self induced deadline can help to take you past the finish line, but sadly not in my case

It’s  a quilt design by Emily Blunt from the magazine Quilt Now which seemed simple and quick. I liked the colour choices although of course you could do it any colour combo. I was new to quilting and wanting to have a go at making flying geese. I vaguely remember quite a production line. There are some 80 plus geese here all needing sewing and trimming. I tried a couple of methods of making them but much preferred the ‘two at a time no waste method’. It was also the first occasion I felt I needed distraction for the more boring elements and I tried and failed to watch tv on my small ipad.

Do you indulge in TV while sewing or have other distractions? I have to say I’ve seen many a sewing set up on the Internet/IG with big screens on adjacent walls and Netflix is the companion of choice. I was always impressed that people could quilt and watch TV. Here I envy knitters or those that crochet who seem to be able to do that with minimal need to check what they are doing. And yes there are hand sewn projects but the close work and then distant viewing doesn’t work for me and my eyesite. But  now I’ve a small sewing table in the lounge and a warm log burner I’m reluctant to leave, particularly with the cold winter we’ve had, I have acquired the  skill of just about keeping up with a programme whilst machine sewing.

I’ve found that I have to be picky about what I watch and certain very fast paced or wordy programmes are out, but some have worked for me.

A number of friends had recommended the TV drama Homeland now on Netflix. Frankly an American spy drama didn’t appeal when it first came round and there were now 72 episodes all the best part of 1 hour to watch –  nearly two full working weeks! So I’d never had the energy or time but now I could multi task then I didn’t feel it was too much of an indulgence and significant progress on a number of sewing projects was made.

For those of you who have seen it is a very engaging and well written drama. There are lots of scenes where nothing crucial happens so you don’t have to watch continuously.  There is some fast paced action occasionally  (lots of bombs go off) and some twists and shocks but they could be replayed. OK I’ve found spying to be yet another career I wouldn’t want my children to pursue and so avoid the constant threat of imminent death!

Another enjoyable drama series which is also quite slow moving  is The Crown, a drama about the early years of Queen Elizabeth II’s reign. At least with  this one I’m familiar with the characters and have a vague sense of the plot line!  So with this new skill and thanks to multi tasking not only can I enjoy sewing but at the same time get an entertaining insight into the murky world of gathering intelligence and royalty!

Distraction was useful as constructing the top was a surprising lengthy process. The pattern rather peters out at this point. You are shown the picture of the finished quilt and told how to make the flying geese and then you improv piece the whole quilt top connecting up the columns of geese. No measurements were given and I suspect that’s what put me off at that stage of my quilting journey.

Without a design wall this took up a lot of floor space along with the ironing  board, the sewing table and cutting mat the lounge was pretty much out of action and yes I had moans from my teen residents…… Before you feel too sorry for them, they have their own lounge with a better TV and an xbox (I think)/ computer etc but what you can’t have is of course exactly what you want!

It did get finished but next time if I do something like this again I think I will draw it out on graph paper so I have the measurements and can play with placement. I think it would have saved time. It didn’t help that  as I was running out of the background pieces I had to carefully cut each one quite precisely so I didn’t get waste.

Well with the top done it was time to think about quilting. I settled for straight line quilting following the outline of the staggered columns.  It was reasonably quick and straightforward. I liked the flash of colour on the binding but it’s mostly white. I’m not sure white binding is a practical choice for a child/teen bedroom but it looks good! 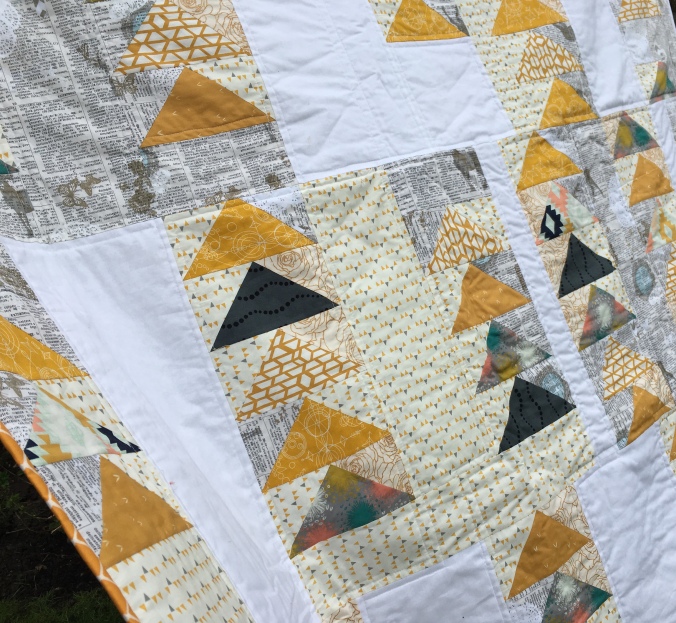 9 thoughts on “Flying Geese Quilt – my oldest work in progress”