No you are not seeing double. This is the next and last link up to do with the fun annual pet show Snoodles of  Lily Pad Quilting organises.

Now this entry is my attempt at capturing Skye, our lilac tonkinese cat (the colour is platinum in the US I understand) on/in a quilt. She is a lovely sweet natured cat, quite dog-like in her need to be around people, well at least be around the women in the family – the boys are too lively and unpredictable. 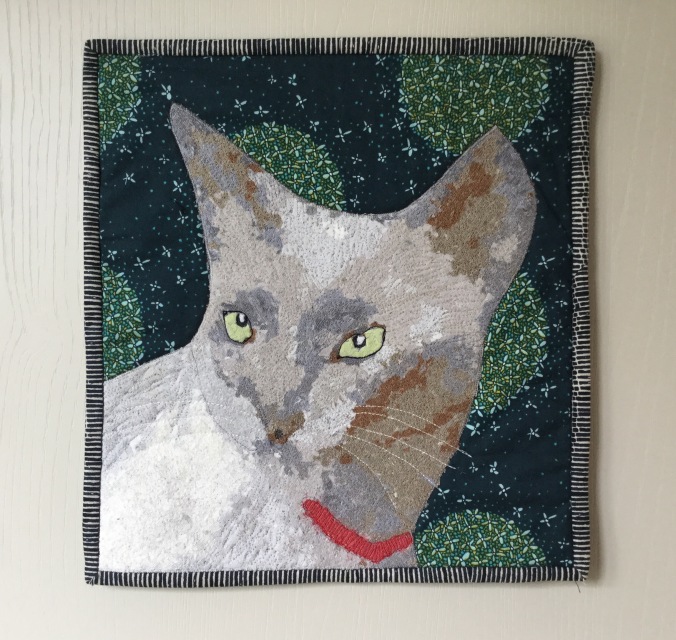 The quilt uses the confetti technique. I’d wanted to have a go at both this technique and trying to capture Skye’s portrait. The opportunity came along when Kim of Persimon Dreams, as part of her weekly challenge quilts earlier this year, offered up the word confetti as her week’s theme. Normally I don’t have the capacity to do a quilt, even a mini quilt, in a week but when I saw this theme I thought the time had come and set aside a few hours to get this done. In fact it is quite a quick process and the very nature of dealing with confetti fabric (which is basically normal fabric cut up into very small ‘confetti’ sized pieces) means that doing it in one chunk of time certainly saves on mess.

The method involves using your confetti size pieces like paint or collage and then using the different colours layer them up to make the image you’re trying to copy. I should really have taken photos but once in the zone it’s hard to remember but there are YouTube videos where the technique is shown. Holding everything together is a layer of organza which you lay over the top and through which you quilt the  finishing details and of course it helps to keep the whole thing together.

In more detail I started with the following picture. 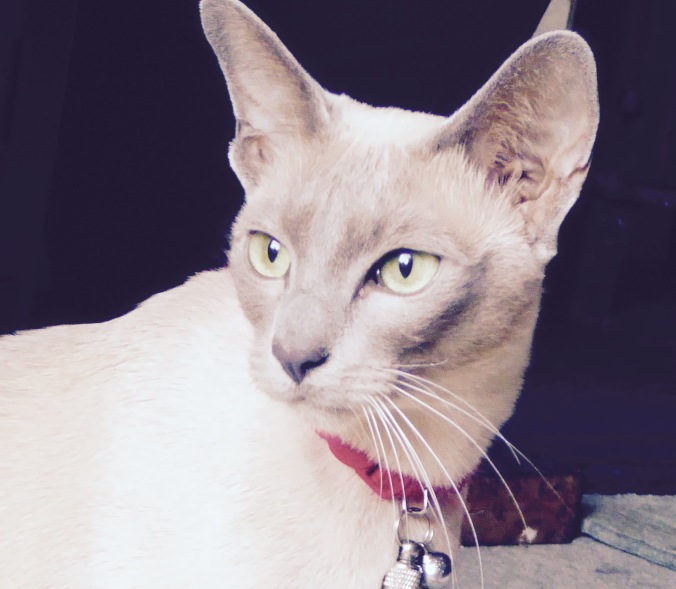 Skye is not an easy cat to capture in the sense that she often looks startled and I’m told the best portraits come from photos  when they’re looking into the camera. The problem is that seeing something like a camera or ipad between me and her clearly unnerves her. I shall have to get cleverer, probably enlisting my daughter.

The next step was to use photo editing to simplify the colours and then select some appropriate fabrics. I chose solids but I think with the benefit of hindsight using tone on tone or batik type fabrics would have given the varied fur colour  more depth. 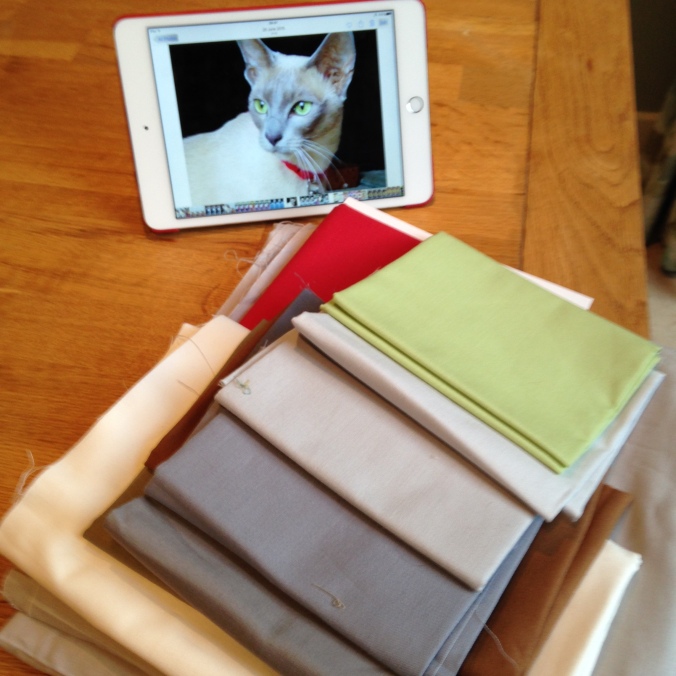 Using a pale fabric background (Kona snow) and tracing the picture on to that marking out the various colour variations I started doing the eyes. I was much influenced by Barbara  of Cat Patches who I came across in last year’s pet quilt show. She writes a hugely entertaining daily blog where her cats feature quite significantly. She has developed a very clever and effective way of doing cat pawtraits  as she calls them and she starts with the eyes. Her technique is to use appliqué and probably the best portrait of many beautiful ones she’s done is also in the show, this time of her new cat Sadie.

Eventually after much readjustment and moving the tiny pieces around, blending them together where possible,  the organza was laid over the top and I could start to quilt the details like fur and shading. It came together quite quickly and then I cut out the head and appliquéd that to the background fabric.

Not sure what Skye thinks of it…. 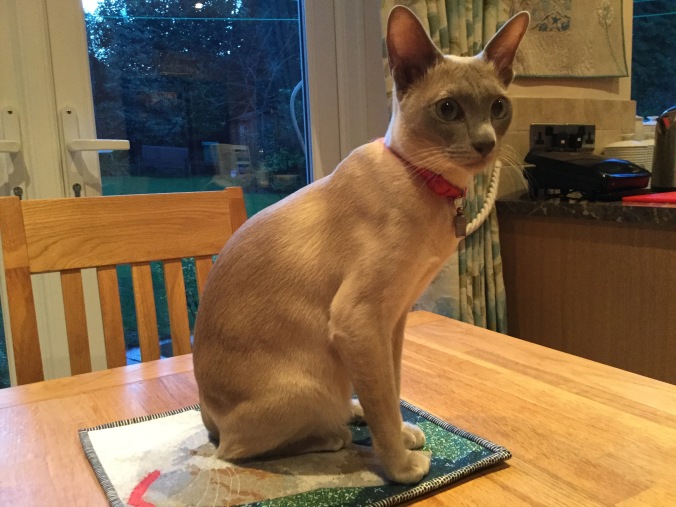 But be assured I will be doing another this time using the appliqué technique of Barbara’s  – does it surprise I’ve already been shopping for the fabrics? 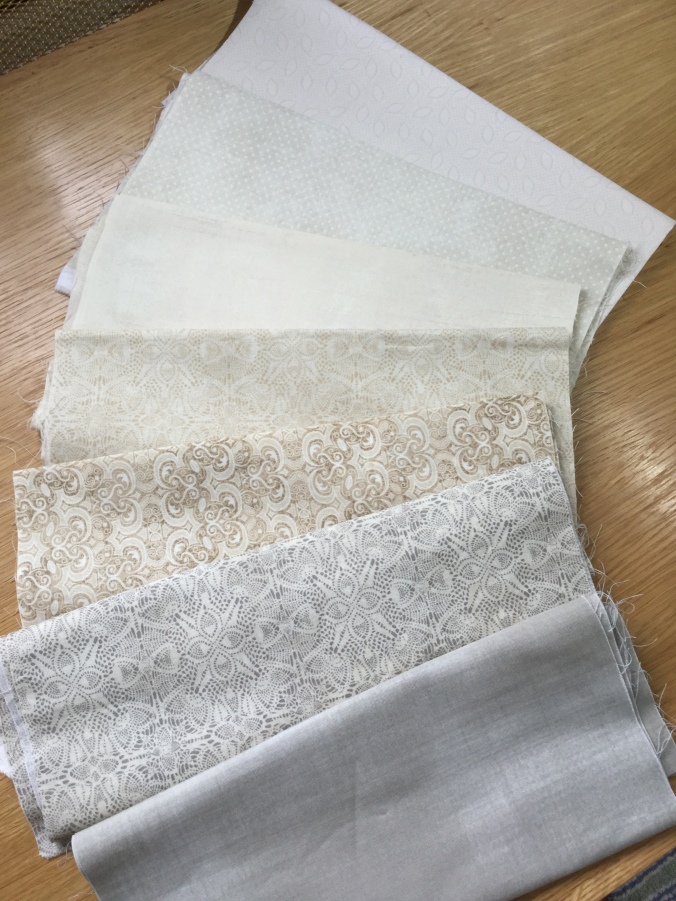