Unless you’ve been deliberating avoiding the news (and I wouldn’t blame you) here in the U.K. we’ve had a tough time. Three terror attacks since March resulting in the deaths of many innocent lives and last week a truly dreadful fire in a tower block in London with 79 deaths reported so far. This post by Kate of Fabrikated talks very movingly of this latest horror.

The political uncertainty caused by a snap election that didn’t go quite the way it was expected to (which seems to be the norm today) is just a passing side show.

Sometimes the cosy and gentle hobby of quilting doesn’t quite hit the mood. At the time of the Grenfell Tower disaster I was somewhat painstakingly doing the blocks for a show quilt. I’ve never done a quilt that will be properly judged so I was grappling with the tedium of accurate seams, proper right angles, directional fabric that goes the right way etc etc.    It’s not my usual modus operandi which is to be pretty accurate but  not to lose sleepover it.  So as it’s an original quilt (using someone else’s pattern is allowed under the rules of The Festival of Quilts in the U.K. compared to Quiltcon where originality is required) there was much agonising over colour choices, measurements, seams ……

But when I saw the images of the fire quite frankly it all seemed so irrelevant.

What was relevant and quite amazing was the response within 24 hours of  Novenka Bex Priestley (IG name @mxrubyrouge) who put out on IG that she wanted to coordinate an effort to collect and make quilts. Unlike other similar quilt drives, the one for Manchester bomb victims or Pulse for example, she wisely hasn’t specified a quilt design banking on quilters having to hand partially made quilts or quilt tops that were almost ready to go. Clever lady as that’s exactly what has been flushed out. The response has been amazing. All sorts of different style quilts as well as fabric and batting gifted. It’s a huge undertaking as there were 120 families who lived in that block. Now this did provide a sewing focus for me.

Sue (IG @suepatches12) approached me as the Siblings Together Bee 2 organiser whether we as a bee could make a couple of quilts over and above our commitment to the wonderful cause of ST. So to cut to the chase blocks are coming in to make 2 quilts. The timescale is tight as quilts are going to be gifted early August. But all being well they will be finished in time.

I even inveigled my lovely mum who is staying with us at the moment and who will be hitting her 10th decade later this year to help with some blocks. She is an accomplished dressmaker and knitter but doesn’t do as much as she has in the past. She wasn’t very impressed with my Pfaff I’m afraid. She is an Elna devotee. But with mum sewing and me pinning and ironing we got 8 blocks made in an evening. 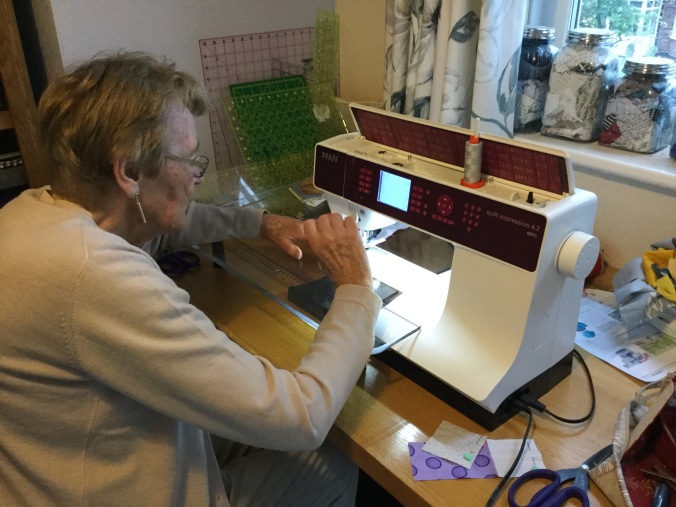 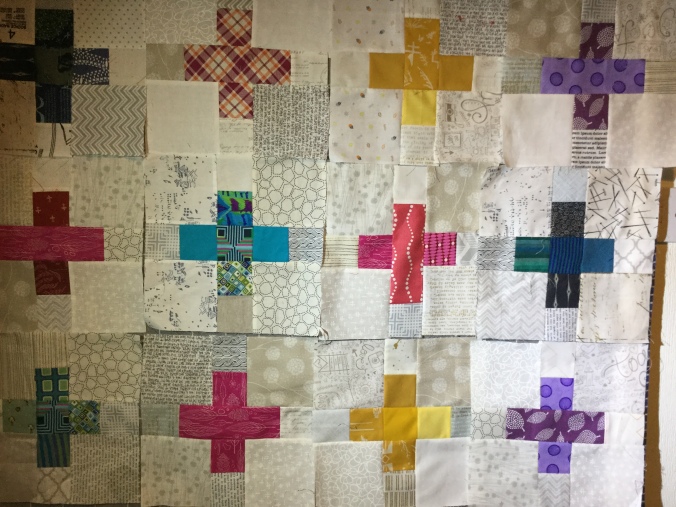 Our current heatwave – it is quite unusual for the UK to get temperatures around 30 degrees day after day – is making sewing less desirable in my hot stuffy sewing room. With two house cats and the house encased with scaffolding to work on the upper levels opening windows wide is difficult. Someone left a small top window open and one of my sons was somewhat surprised when in the upstairs bathroom, doing what you do in such rooms, heard a scuffling noise and suddenly both cats jumped back in obviously having gone for a jaunt round the outside of the house. My admiration for the many quilters in hot countries who don’t have aircon in their sewing rooms is greatly increased.

In this heat I so envy our cats who can spend their days like this…… but cooler weather is predicted and I’ve got sewing to do….

Linking up with Lorna of Sew Fresh Quilts