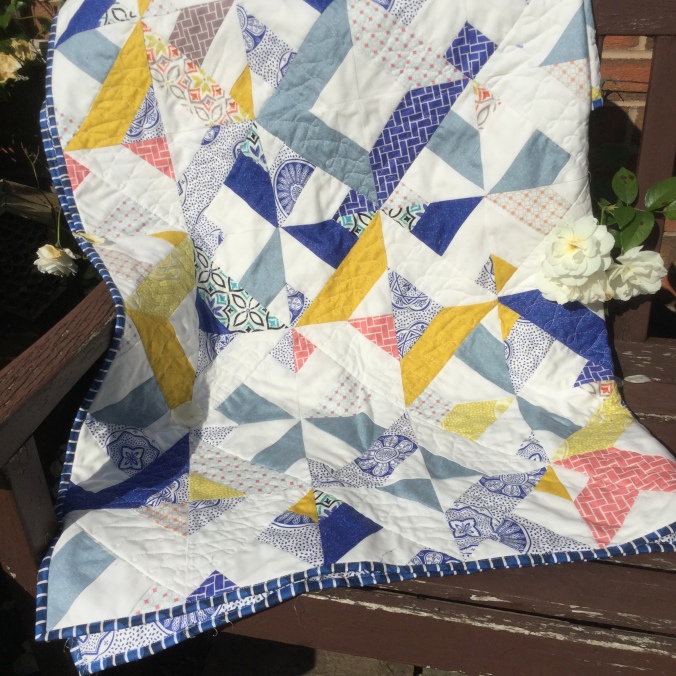 You get the impression that some charity quilts are regarded as second best, to be considered when a quilt hasn’t worked out as planned.  Whilst I’ve tried hard with the gifted quilts to produce quilts I’d like to keep this one I fully admit was a long standing WIP made from the left over strips from a jelly roll of Marrakesh by Irene and Lewis about which I had my doubts…. 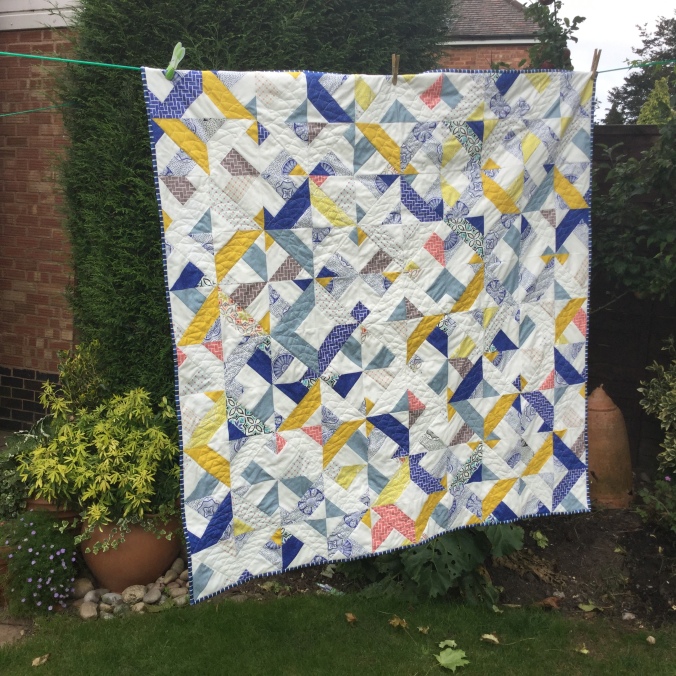 I’d extracted the pinks and greys from the jelly roll for a quilt for one of the children’s teachers who had got No. 1 son through a crucial maths exam. For that very significant achievement I would have cheerfully made her a king-size quilt but as a baby was on the way this seemed a rather more practical gift. It uses the Three Dudes pattern which is one of the many excellent video tutorials by Jenny Doan at the Missouri Star Quilt Company. The pinks work well together and the rather soft palette is suitable for a baby girl when you don’t know the nursery colours or preferences of Mum and Dad

But for the ‘left over’ quilt which mostly came  together at a Project Linus quilt day run by Joy Edgington who, aside from the dubious pleasure of being my go-to quilting teacher, is the local coordinator, I really wasn’t sure about it. The strong yellow and blue just seemed to be overpowering it. Thanks to ironing fairy Lynn and Mariana who sewed some it with me much of the top was finished by the end of day.  But now it’s quilted and bound the magic has happened and I rather like it.

I have to say that I wouldn’t recommend this pattern for a quick quilt finish. There are a lot of seams which take up fabric of course and per block it’s quite fiddly. This is in contrast to the quilt I made it last years Project Linus day which was chosen specifically because it looked to be a very efficient design and perfect for a jelly roll that got rejected for being too pink! Designed by Amy Friend, who I think is one of the most talented and original quilters out there, it’s called Interlock.

The next Project Linus quilt is this smaller cot quilt that was originally a FMQ practice piece for a FMQ course I went on led by Joy at New Pastures Quilting.

I’ve been on some excellent quilting courses run by Joy and they have been so useful. Poor Joy is however is quite used to me having a slightly different approach in her sessions as I like to make what I want to make but she’s fab and very flexible. This was supposed to be a charm square sewing machine cover with us practicing motifs in the squares. But a baby quilt it became …..  I used available scraps, mostly Horizon by Kate Spain, a range I love and a batch of  Kona ash squares I miscut for another project. Obviously I’ve not been listening well enough in Joy’s quilting classes!!

I’m not sure you can make out the motifs but there are unintentionally grumpy cats at the top, some hearts in there, the word love and finally upside cars on the bottom. I guess you  can see why I need quilting classes!

Linking up with Nicky for Scraptastic Tuesday. And Nicky again for the FAL Q3 2016 linkup as the smaller of the quilts was a proposed finish for this quarter – see here for my FAL list of targets

5 thoughts on “Charity begins at home …. and with scraps”