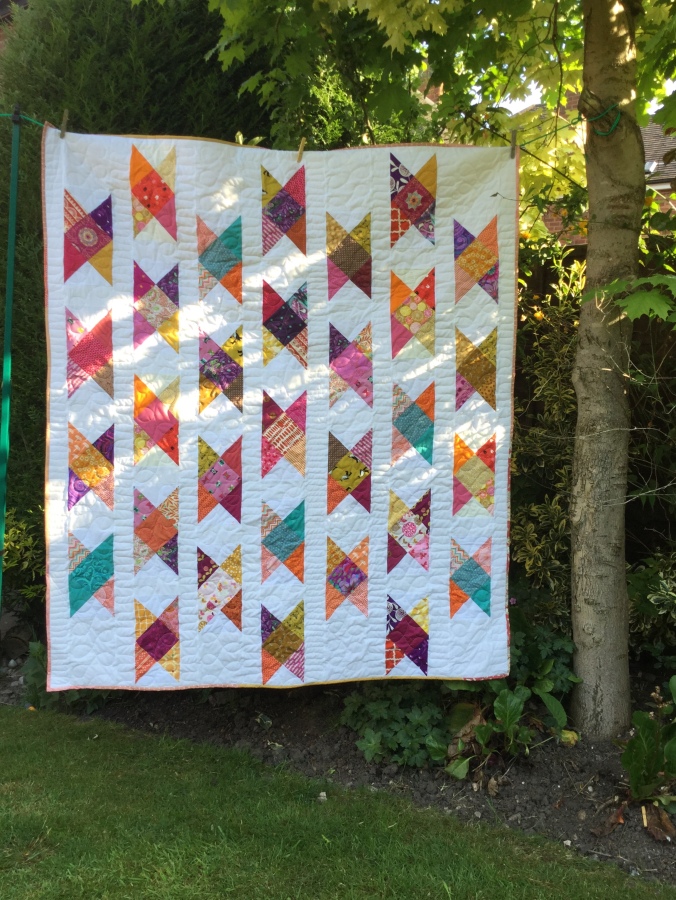 Jacq  who commented  on a post I wrote earlier this year about quilting and watching Netflix and TV etc, made me laugh when she said she often associated the quilts she’d made with the programme she’d watched at the time she made it. So last year’s Sewcial Sampler was The Crown and the Swoon 2016 quilt was Breaking Bad. So on that basis this is the Royal Wedding Quilt. I suppose these wonderfully zesty and exciting colours rather suit the latest royal bride who looked stunning and brings some much needed energy and difference. Meghan is a big hit here!

I normally get some time during the week to sew but not last week so I wanted to devote some free time this weekend. I was one child down which always helps in terms of freeing up time. She was away getting thoroughly  lost on her Duke of Edinburgh trek wearing my fitbit so 56,000 steps later I’m on a mega 102k for this week! Once the lounge had been emptied of teenage boys who’d stayed over night I settled down to watch the wedding with a bit of basting on the floor. However I think the royal couple look slightly disapproving of me using spray glue in the lounge…..but I have to say it worked very well. 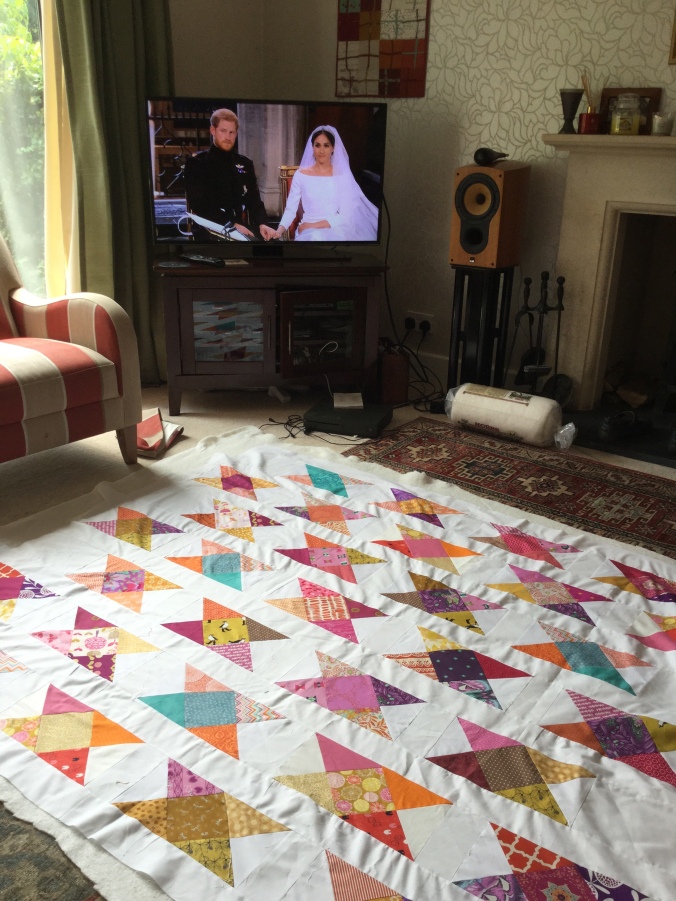 I was onto the quilting by the end of the wedding service and during the cello bit, popping out to make a cup of tea, I heard Felix meowing loudly outside. This is a worrying sound when you have indoor cats. Sure enough he had managed to leap from an upstairs window onto next doors flat roof. This is trickier than it sounds as you have to jump up and across. 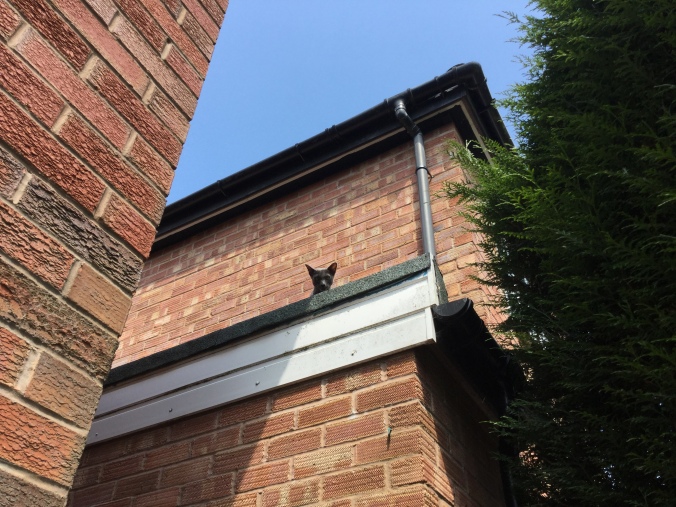 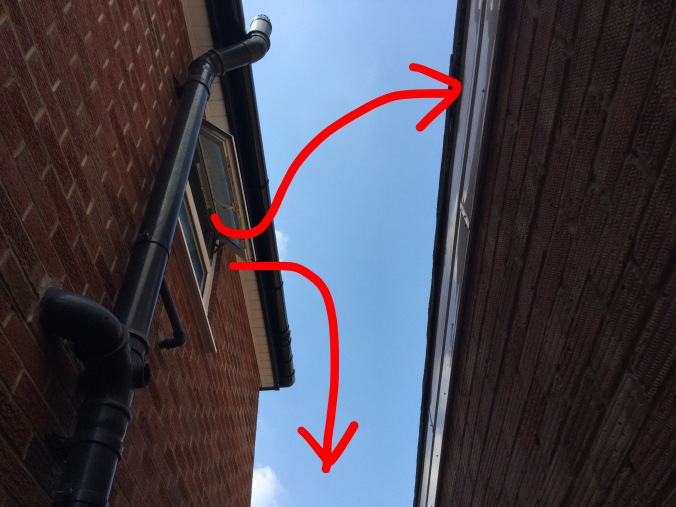 I retrieved  him from the roof by accessing it via our neighbours window.  Back home I then covered the window sill with sticky tape specially designed to keep pets off. Clearly either the distress of being trapped on the roof or the sticky stuff didn’t deter him because 45 minutes later I was back round the neighbours hauling him through their window again so I’m going to have to think more. He has more brawn than brain.

Once I’d got back to the wedding they were now in the horse drawn carriage surrounded by a mounted escort which for me is the best bit. I love horses and these were magnificent creatures but I’m a sufficiently experienced observer of these events to know that there is nearly always one naughty  horse. I regularly ride and the slightest thing can spook a horse even down to an innocent plastic bag in a hedge so when it comes to cheering crowds waving banners and flags I’m surprised there aren’t more problems. I know they train them but you can’t recreate the scale and noise of those crowds.  Well one of the front grey horses was decidedly troublesome and it was impressive how the rider just about kept the horse in check as it cantered on the spot and at one point veered into a policeman. The rider must have been pleased to get back!

Back to the quilt, it is made from a whole bunch of blocks made by the Siblings Together Threadhouse Retreat Bee. It’s a great block, little wastage and very quick. I received easily enough for two quilts.

I’d asked for warm colours and crudely divided those with slightly more analogous colours from the really zingy ones .  Here’s the first quilt for comparison. 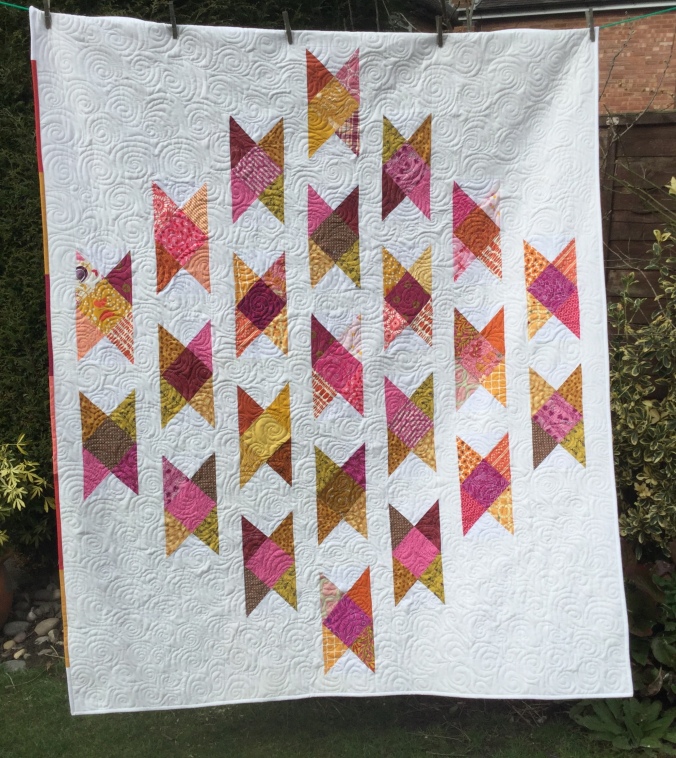 Whereas you can see with the second the colours take it up a notch.

I chose a simple FMQ quilting design highlighting the verticles as opposed to an all over design. Kate @chilternweb had very kindly sent me some Pfaff feet and bobbins as she’d just received a beautiful Bernina. They were in a really sweet pouch with a flex frame which intrigued me. I’m going to explore those more. 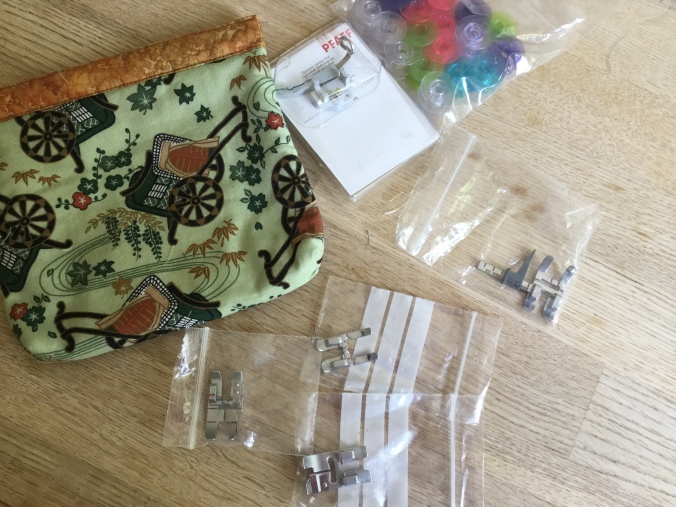 Amongst them was the 6D Dynamic Spring quilting foot, so I thought  I’d give it a try. Well what a great foot. I much preferred it to my usual FMQ foot which is the open toed. Fine for detailed work but fast all over design seemed to make the stitches easier. OK it doesn’t help get my spacings between my quilting  lines anymore even but that is too much to ask for! Thanks Kate.

I have a sneaky suspicion their first night as a married couple Harry and Meghan weren’t sleeping under a cotton patchwork quilt but how sad for them!

This is a Q2 QAL finish and covered here

13 thoughts on “The Royal Wedding Quilt”